The weather Camera view to SE-NW

Caution: Do not use the data for decisions concerning human lives and all kinds of properties.

Data sharing of meteocharilaou with the networks of meteorological stations

Photos and videos are for personal use only

And God said; Let there be lights in the firmament of the heaven… Gen. 1,14 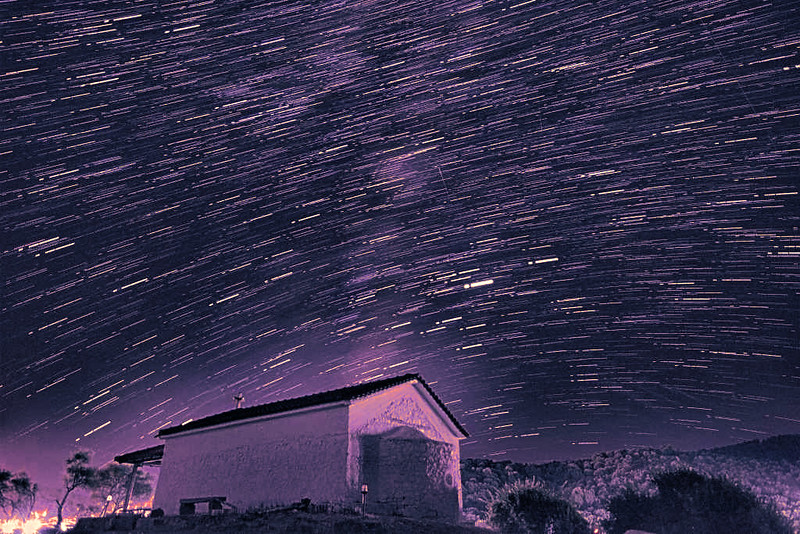 The Resurrection of Christ

The event of the glorious Resuraction of our Lord which is the center and the culmination of our life and faith as well as a divine invitation that concerns each individual person, referring to the beginning of the new world and the new creation that God offers to mankind.

The resurrected Christ invites us to a continuous renewal of “the new creature in Christ”. He invites us to renew our personal relationship with Him. Continuous spiritual renovation is a defining element of Christian life. We are called to renew our trust in God’s power, in His Divine Will, in Providence and in His redeeming plan.

We are called to renew our trust in God’s power, in His Divine Will, in Providence and in His redeeming plan. We are all called to witness and confess the fact of the Lord’s Resurrection, for Christ is Resurrected and is among us, constantly telling us not to be afraid and not to be cowardly in anything, for it is He who has defeated us that no one else can defeat.

Let us essentially experience the message of the Risen Christ and spread it everywhere, a strong and unrepeatable message of life and hope, and flood the hearts of all with love and spiritual joy and joy.

“Christ is Risen” is said at this time by Christians across the length and breadth of the earth.

Testimonies of the Resurrection of Christ

So in the witnesses of the Resurrection we have enemies and friends, we have eyewitnesses too. But in addition to them, there are thousands of other witnesses testifying in the court of history about the Resurrection.
They are the five hundred to whom Christ appeared in Galilee. When the apostle Paul wrote about this appearance to the Corinthians, many of them were still alive, and the Corinthians could find them and ask them.
Then there are the three thousand who believed in Peter’s first sermon. And Peter did not preach after fifty or a hundred years, but fifty days after the Resurrection and ten days after the Ascension. And he even spoke courageously by controlling the crucifixes of Christ: The one you crucified rose and appeared after His resurrection and we saw so many people. Resurrected as prophesied by the prophets? Everyone was modern about the event and could have ascertained it, but no one denied it.
Some ask why none of the historians of the time wrote about the Resurrection of Christ. We all know that at that time lived the Jewish historian Iosipos, who wrote around 100 A.D. in Rome. He was a fanatical pharisees and of course he hated Christians. He saw with an envious eye the spread of the Church of Christ. So how to write about the Resurrection of Christ? His silence is rather in favor of the Resurrection. And if he still wrote, his testimony wouldn’t be great, since he wasn’t an eyewitness and a witness. He’d only write what he heard from others.
Apart from historians, however, there are the living monuments, which attest to the fact of the Resurrection. Such is the Sunday day and the presence of the Church in the world.
The naysayers of the Lord’s Resurrection have formulated certain theories, thinking that this is how they do something against it.

These are:
1) The disciples stole the body of Christ and then spread that Christ was resurrected.
2) Christ did not really die on the cross, but fell into deep lethargy and
3) the apostles were delusiond. We’ll examine them right away.

1st accusation. The apostles stole the body of Christ.
It’s an old charge. The Jews paid the guards of the Tomb to say such a thing (Matt. k’13). If we accept this accusation, the following are left unanswered and inexplicable:
– Since the soldiers fell asleep and did not see or hear how the tomb was emptied, how can they tell the truth about the theft of Christ’s body from the (frightened and hidden) disciples of Christ? If they still realized them, why didn’t they arrest them to be punished?
– Because the guards of the tomb were not tried and punished, having neglected their duty and slept, while as is well known, Roman laws were very strict in such violations. (Prax. l’ 19)
– Why didn’t anyone officially blame the students for being punished if they broke into the grave that sealed a military authority?
– Where would the students find such courage to attempt such a theft, especially in the days of the Jewish Easter, that the city was so crowded?
– What would be the benefit of the students by stealing the dead body, to spread what was resurrected, since they were only awaited persecution, imprisonment, and martyrdom?
– How do the frightened apostles, who dispersed when they saw the army’s spiral in the garden, become brave and fearless and preach the Resurrection in front of the rabid mob of the Jews?
– How did they decide to do such an immoral act and then write letters like James, Peter, John?
– How did they all agree to the lie, and how did they keep the secret all their lives, without anyone revealing it, out of a conscience check or the burden of persecution, torture and imprisonment?
– How do you explain the conversion of the apostle Paul, who did not know Jesus before jesus like the other disciples, and yet he too becomes a preacher of the Resurrection?

2nd accusation. Christ didn’t really die on the Cross.
He fell into deep lethargy, something his disciples did not notice, and they were misled. Then the coolness of the tomb and the aromas brought him to his place, so that he rolled the stone. But:
– Not so many people may have been misled about the true death of Christ. Experienced soldiers couldn’t be fooled. The high priests and Pilate were convinced that Jesus died, which is why they had the soldiers guard Him. And the Jewish Talmud, hostile to Christ, also testifies to the death of Jesus.
– The blood and water that ran from Christ’s side is proof of His death, scientifically.
– The body of Christ, before it was buried, was crushed with a large quantity (as a hundred liters) of myrrh and aloe and then wrapped with textile strips (othonias) from head to toe. Assuming he was alive, when he was buried, he’d suffocate to death.
– And alive to be taken down from the Cross it was impossible to survive after three days of fasting and flogging and bleeding. After so much exhaustion, it was impossible to roll the huge tombstone
– And if he got that far, with a lot of effort to roll the stone and leave, how did the soldiers not arrest Him?
– Then, where did he find enough courage to go home and make His appearances and so many trips that he would show up here and when there?
– The impression he created on the apostles when they saw him was that Jesus is the winner of death and not an exhausted man who fights between life and death.
– If Christ had recovered from lethargy, he should have had the same body he had before and even been destroyed. But then why didn’t Maria recognize him and the two students who went to Emmaus?
– It was impossible to recover from fainting and with pierced hands to peel off His body the textile strips that with myrron and aloe were stuck and had become a body with His Body. But, assuming that happened, what clothes did he come out of the grave in? The funerals were few and unsuitable for walking outside. So who gave him the clothes?
– During the intervals between one and the other appearance, where did Jesus go? How could he hide without anyone seeing Him? And what happened to the 40th day and the students never saw him again? And how did it disappear from their eyes and give them the impression that it was taken over?

3rd accusation. The apostles were delusioned.
Because, in other words, the apostles and women waited for the Resurrection, they were subjected to a group submission and fell victim to hallucinations. But:
– Why did the Myrofores take perfumes and go to grind the dead body of Jesus after they waited for the Resurrection?
– Why was Mary’s first thought, when she saw the empty Tomb, that they stole the Lord and not that He was resurrected?
– Why, when Mary went back to the monument and saw the Lord himself, did she think he was the gardener?
– Why didn’t the students believe in women’s words when they told them about the Resurrection, but they saw their words as chatter? (Luke 11)
– Why didn’t Thomas believe, but asked to put his finger on the Pierced hands and feet of the Lord?
– Why did the shows stop at 40 days?
– How can people who fantasize and hallucinate develop action, like the apostles?
– How do you explain the appearance of the Lord to many at the same time the theory of hallucination?

History is the study of sources. What matters is what the protagonists of 1821 wrote and what they believed and not what various researchers write today influenced by modern ideological …

7.3.1. ensure that citizens are informed that the vaccination is NOT mandatory and that no one is politically, socially, or otherwise pressured to get themselves vaccinated, if they do not …

There are Christians who are afraid to take it, so that germs don’t get stuck! If that were the case, none of the priests would live, because in the end …

Every time there is talk of saliva, teaspoons and the like, by those who have targeted the Holy Communion, it comes to mind the miracle of the congenital blind (John, …

Maria Kornarou. In the climate of anti-Christian frenzy that we are experiencing on the occasion of the pandemic, we can see even more clearly the paradox that we have been …

The Holy Image of our Lady of the Comforter continues to weep at the Church of Agios Dimitrios Nea Switzerland in Byron. The event began during the service of …

Dear, you’ll look good all year, though on the first of the year and every day you do what God likes. Because the day becomes bad or good not by …

One of the unique photographs, from the Celebration of St. Andrew of Protocles, which took place outside the Holy Temple in the city of Constanta in accordance with Romania’s state …

A new graffiti was displayed in Belgrade by two young children, depicting the late Serbian Patriarch Paul and the late Montenegrin Metropolitan Amfilochio.   The graffiti was done on a …

For a long time on the website are posted photos, from our city mainly but also other topics in recent days. All are personal and do not come from other …

Sermon of Saint John Chtisostom, Archbishop of Constantinople. Whosoever is a devout lover of God, let him enjoy the beautiful bright Festival. And whosoever is a grateful servant, let him …